When Senamile was 11 years old, she was fascinated by the fact that people travel to space and the moon. This sparked off her passion to become a Nuclear Physicist. 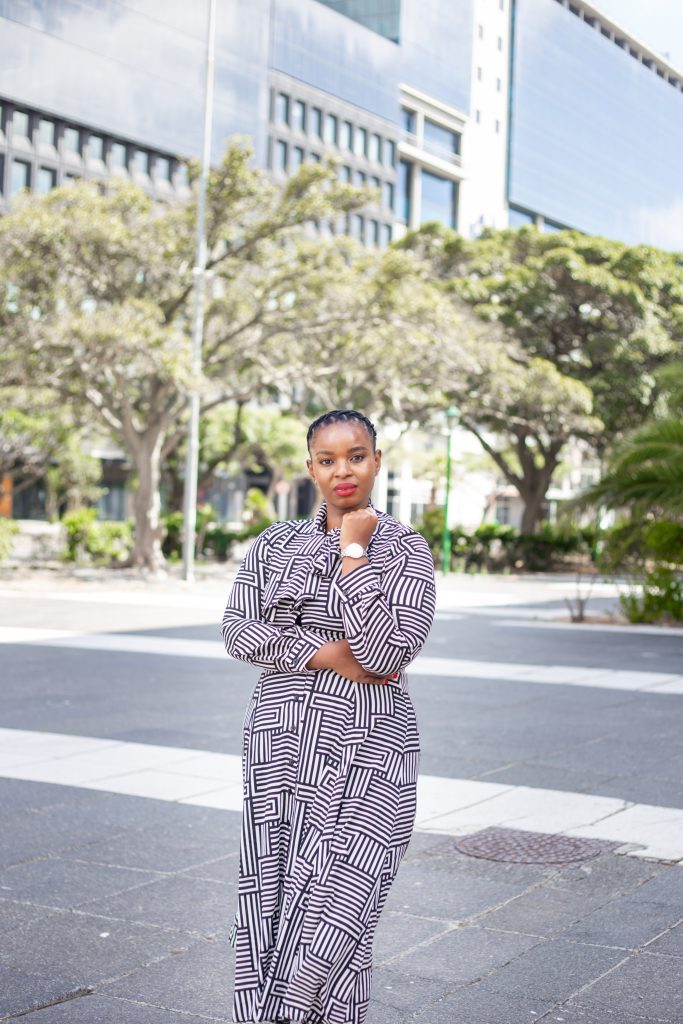 Hello, Senamile! We are privileged to host and learn from you today. Thank you for joining us
Thank you, Winnie! I am happy to be here.

Briefly introduce yourself to our audience
I am Senamile Masango from South Africa, a Nuclear Physicist and Women Empowerment Activist. I am a researcher, Council Member, and scholar at the University of the Western Cape, where I study the structure of the nucleus with a method called Coulomb Excitation. We want to understand the interactions that happen inside the nucleus. This sounds easy but it is not, you have to be strong in mathematics, coding, quantum mechanics, and also be an analytical thinker.

How did you start considering a career as a Nuclear Physicist?
I was born to and raised by a strict father in KwaNongoma, a deeply rural area in KwaZulu-Natal, South Africa. I am a Princess by birth, from the Zulu Royal household. My destiny was sealed on the day that my high school (Mlokothwa High School) geography teacher, Mr. Ziqubu, told us about Astronauts. I also learned that no one in Africa had ever traveled into space. This strengthened my decision to pursue science and pushed my dedication to subjects that were related to astronomy. I worked hard and excelled academically.

Five years after deciding to pursue science for my future, I enrolled for a degree in science at the University of KwaZulu-Natal at 16 years of age. My father was very strict and didn’t allow me much of social life. However, I was not that responsible so I made mistakes and ended up pregnant. I also failed some of my modules.

I went back to university in 2009 and completed my degree in 2010. With my father’s support, I picked myself up and turned my failures into a learning curve. I learned that mistakes are part of life but what matters is how I pick myself up from them. 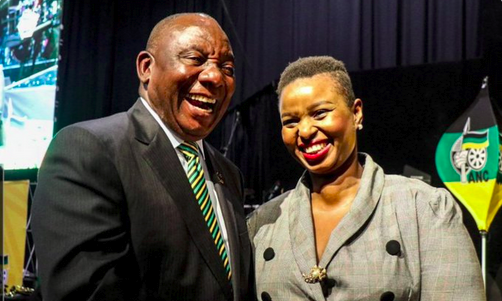 I wanted to make history as the first African person and first African woman to travel to space. [Un]Fortunately, Mark Shuttleworth beat me to that. I am hopeful about meeting him someday to say this to him in person, haha.

As an associate member at CERN, I go back to the headquarters in Switzerland once in a while, to present my research. Being part of CERN has boosted my confidence as a young researcher; being on an international stage is an eye-opener. I want to publish my research and leave my mark for future generations.

Tell us about how you extend your work as a Nuclear Physicist to your community
I am a board member at the South African Nuclear Energy Corporation (NECSA), which makes me the youngest board member at a state-owned enterprise in South Africa. Numerous local and international women’s conferences have invited me to speak at their gatherings. I address issues that are faced by women in science.

My focus is on women from disadvantaged backgrounds. This is where my passion lies. I want to take science to people in rural areas. I am the Founder and Chairperson of Women in Science and Engineering in Africa (Wise Africa).

In December 2014, I launched the Senamile Masango Foundation as a way to ensure a more inclusive future in STEM studies and careers for African girls. The foundation provides leadership and role models for young people wishing to enter the fields of science and technology.

To me, the number of women in engineering and science has been of particular concern because women are still under-represented, with the percentage of female graduates in science and engineering still below 20% in many countries. The foundation is looking for ways to get science kits to under-resourced schools in KwaZulu-Natal and build science laboratories in these communities. 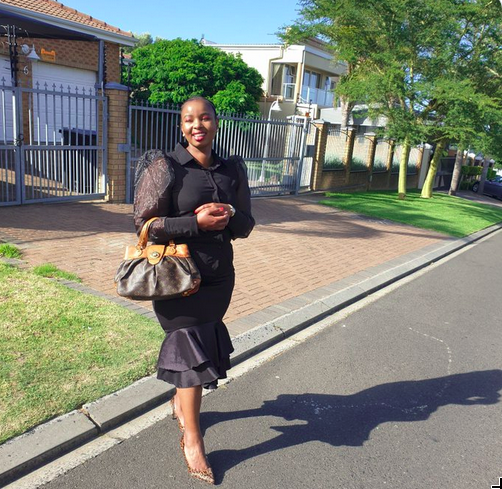 We also have a research division and have been working with the BRICS Youth Energy Agency since 2018. When you educate a woman, you educate the next generation. Women are the greatest resource any country has. Providing encouragement and opportunities for girls and women in science and engineering is one of the most powerful ways of harnessing this resource for the development of the country.

I believe that STEM growth could speed up job creation, and social upliftment. Increasing the number of women in science and engineering within any company is a competitive advantage. An increase in the number of female scientists and engineers will result in an increase in critical skills, better access to basic services, and the creation of products.

Let’s talk about the challenges you have faced on your career journey
My biggest challenge in my career is my skin colour. If you look like me, no one believes in you; you have to prove that you know your job and that you can think!

My gender is another challenge. If you’re a woman, male colleagues and institutions look down on you, like you are not capable or don’t deserve to be a scientist. Black women who are scientists are still few. This means women like me have to work twice as hard to prove their worth.

I, however, use these challenges to fuel my ambition, work hard and ensure that I excel. Nothing is going to stop me from breaking every barrier until I achieve my goal. I want to transform the lives of young people throughout the world and be a good role model to them.

What does the future look like for Senamile?
I want to have my own educational show that will teach the youth about science, and highlight the importance of education. As a motivational speaker, I see myself traveling the world. I see myself sitting on various boards throughout Africa. My future is being on the cover of Forbes magazine.

As a child, I dreamed about pursuing a career in Science. This seemed like a far-fetched dream for me considering my upbringing. Now that I have attained my dream and am working at developing it, I also want to help as many women and girls attain their dreams. That is very close to my heart. 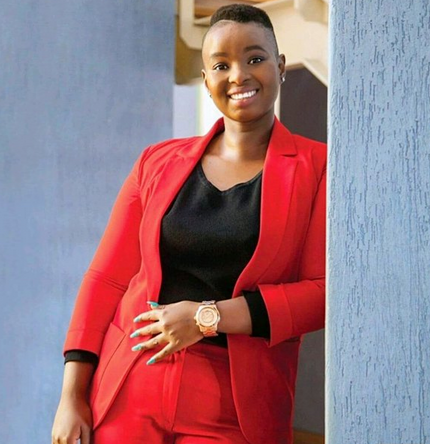 As a Nuclear Physicist, you have experienced multiple moments of recognition; is there anything you can share about awards?
Yes. I have been privileged to receive some awards: 50 Global inspirational women of 2020, 2019 Mail and Guardian’s list of 200 young South Africans in Science and Technology, ranked 29 in 2019’s 100 most influential young South Africans, News24’s 100 Young Mandelas of the future 2010, and Inspiring Fifty South Africa Nominee.

I have also been named as one of South Africa’s top Black women scientists under 35. Another memorable moment was when I shared a stage with model Naomi Campbell in Durban at the 2019 Forbes Leading Women Summit, which was held to honour African women who are transforming their industries and communities. I have also been on the same stage with Dr. Nkosazane Dhlamini Zuma: former AU Chairperson, currently Minister of COGTA, and the former President of Ghana, John Mahama.

I was invited to be part of the Second Eurasian Women’s Forum 2018 in Russia. The Eurasian Women’s Forum is the world’s biggest influential platform for discussing the role of women in contemporary society. Another prestigious invite was to FEMROOT hosted by United Nations’ 75th General Assembly. The event aimed to highlight the importance of having females in STEM from an African perspective.

You will find my name in various magazines, and as a guest on numerous radio and TV stations around the country.

What do you enjoy doing outside work?
I enjoy doing strength training or going to a good restaurant with friends and having a good impacting conversation

What is your favourite quote?
“Leaders don’t seek followers. Followers are attracted to leaders” ~ Myles Munroe. 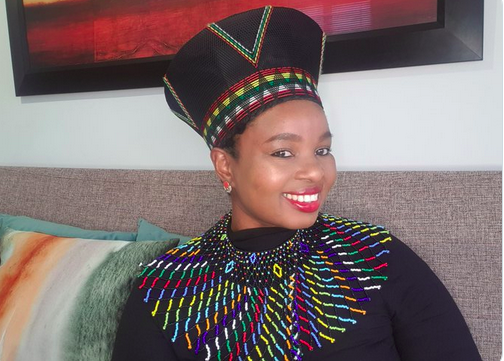 Please encourage a young girl who is passionate about STEM
Yes, science is challenging and there are lots of stereotypes around it but don’t give up, keep going and focus on a bigger picture. Once you arrive at your destination please ensure to bring other women with you.

Thank you very much, Senamile! It was a privilege to host you today. Thank you for honouring our invitation. We look forward to future interactions with you. 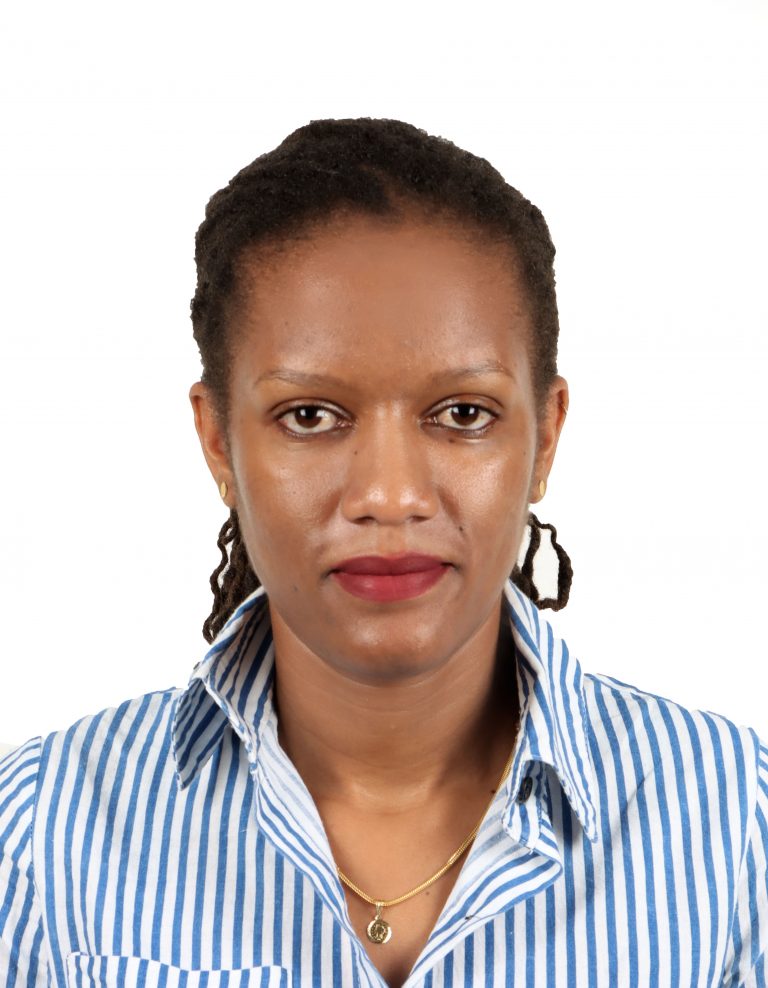 Growing up, we thought that a passion for good health only 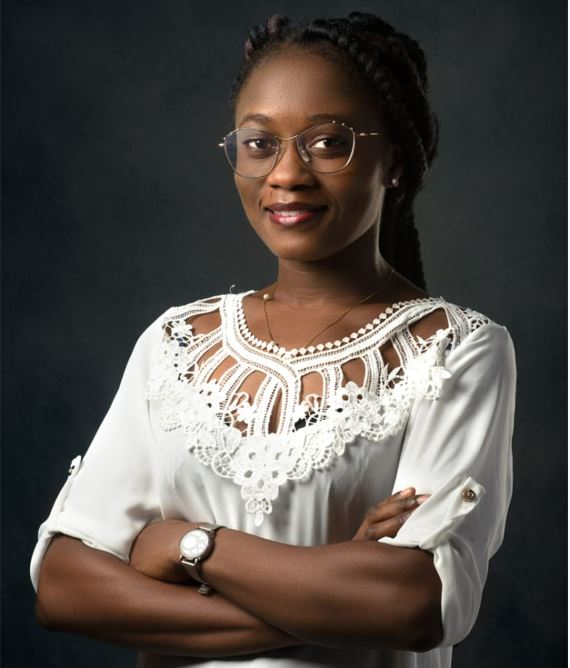 Glorie is a Computer Scientist with a passion to apply technology 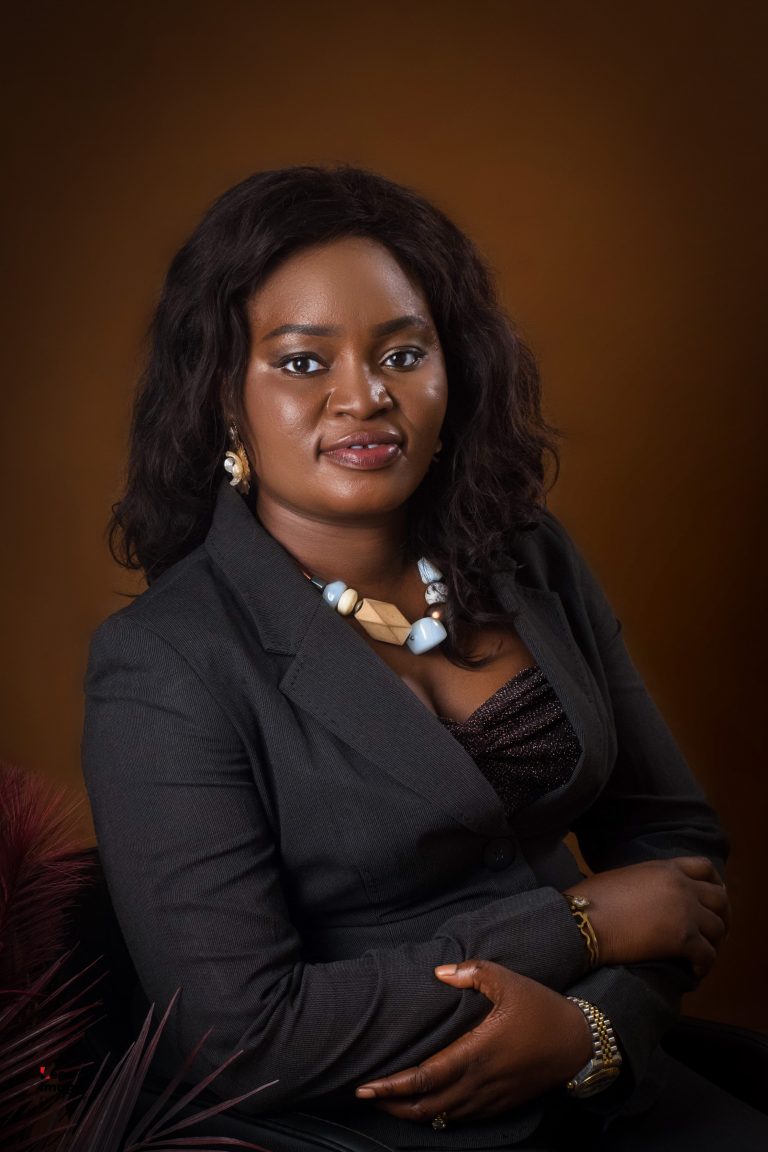 Today, Obiagboso from Nigeria walks us through her corporate journey in 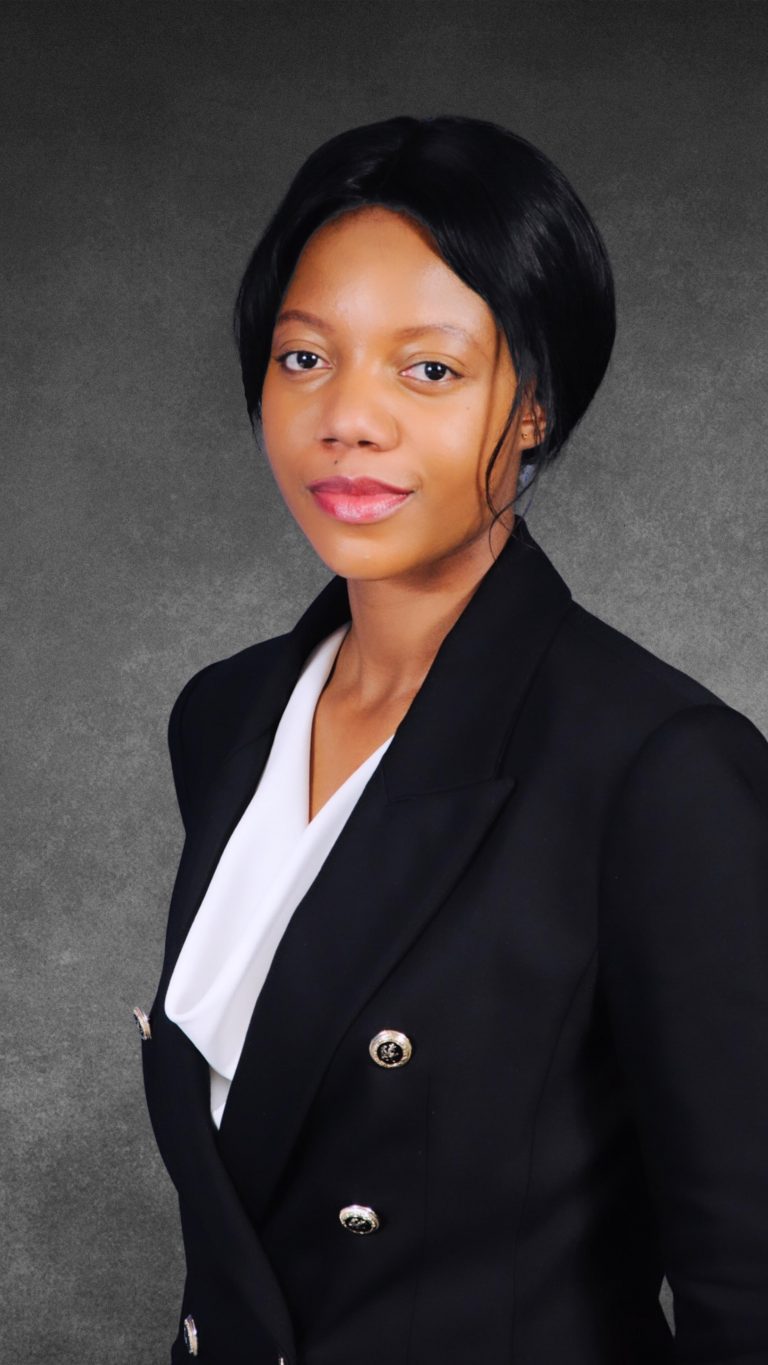 Growing up, we thought that a passion for good health only led to medicine as a career. However, Neema has combined this passion with statistics